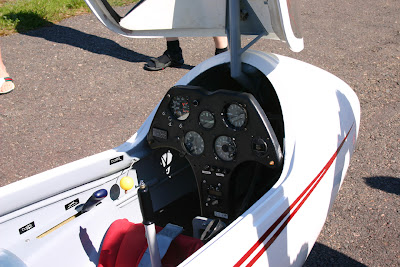 One saturday morning in May, I drove from Helsinki to Nummela. The Nummela Aviation Center was busy with its morning business, planes were being pushed out of the hangars and prepared for the day. A bunch of pupils gathered around the classroom door, and we were welcomed by Mika Koski, who gave us a quick bare-bones lesson on the basics of gliding, and after a cup of coffee we moved on to the starting place. There was a rowdy bunch of fellows having a bachelor party before us, and while we were waiting for our two-place sailplane to land we got to see how aerotowing works.

For ten pupils, we had two ASK-21 gliders with instructors, and those of us who were later in line for the cockpit, were running back and forth bringing the towline from the tail of the PIK-15 Hinu to the nosehook of the glider and lifting the wingtip up for the start. Between our takeoffs, the number of single-place sailplanes was growing, keeping the towpilot busy.

We had lunch in the restaurant of the local Airhotel. The buffet table offered excellent food, and the only thing that kept me from overeating was the thought of soon getting to fly a sailplane for the first time in my life. I didn't suspect the ride would be any shakier than my previous experiences in aviation, but nevertheless I abstained from a second helping of tiramisu.

In the afternoon, I finally got to don a parachute: first you put on the shoulder straps like a backpack, attach the front strap, and finally the ones around your thighs, tightening the harness so it's almost, but not quite, uncomfortable. You climb into the front cockpit, the student pilot's seat, of the ASK from the left side. You lower your feet in front of the seat, and holding onto the sides of the cockpit, ease yourself down. You attach the waist belts, then the belt between your legs snaps to the buckle in the middle, then the shoulder belts, and again everything is tightened so you can't get loose from the seat.

Behind my back, the instructor, Jyri Raivio, explained the cockpit layout and told how to close the plexiglas dome without breaking anything. Then for the pre-flight check: the rudder pedals  moved freely from left to right, the control stick back and forth (elevator) and side-to-side (ailerons), exactly as they should. By my left hand I found the airbrake lever, and in front of it, a yellow ball, the towline release. In front of me were the crucial instruments: the airspeed indicator, the altimeter and the variometer to show whether we were going up or down and at what speed. I was already immensely excited. The towhook was being attached, soon we'd be flying!

Jyri held his thumb up for the wingman to raise the wintip from the ground. Seeing this, the towpilot knew we were ready for takeoff, and pushed the throttle open. Faster and faster, we rolled on the main wheel, the instructor keeping us on track with the rudder, and the wings level with the ailerons. Then the rumbling sound  quit. The wheel was off the ground, we were aloft! We were flying, the sun was shining, the brightly colored Hinu was pulling us ever upward in a gentle turn.

(To be continued; there is work to be done in the meantime.)
Lähettänyt Anssi Rauhala klo 22.56 Ei kommentteja: 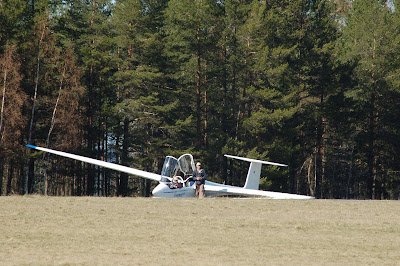 I have told about how highly I esteem aeroplanes, those flying machines of the air, that offer us earthbound humans a chance to taste something better than slavery to the gravity. I'll elaborate in this and a couple following posts.

A little personal history:
In the 1990s I joined a hang-gliding club, and for a couple of years I practised flying suspended under a glider and towing others to the air by means of a snowmobile. With Agur Fuga, LaMouette Atlas 16, and Airwave Magic 4 gliders I collected an hour and 47 minutes of airtime, on 52 tows. This tells something about the procedures of training back then: in the beginning, the student pilot was towed with a short length of rope at the height of about ten meters, for thirty seconds to two minutes at a time. My instructors, Hannu Laitinen and Eero Loponen taught in a way that even the thickest student pilot could learn. I remember those lessons with gratitude. Working freelance being uncertain, and the economic recession getting ever deeper, I sold my second-hand glider and harness, not being able to afford even a tankful of gasoline for the drive to the flying sites.

At the turn of the millennium, a married man, I hopefully tried to return to aviation, when the Mäntsälä Aviation Club was inviting the curious to learn to fly ultralight aircraft. Jorma Mäntyharju taught me on a Comco Ikarus C42 for four flights, 2h 25min altogether, from the Hyvinkää airfield in 2001. Then another blow came, freelance gigs drying up and the iron grip of the economic reality squeezing the less successful (i.e., poor little me) out of the game. I also had to accept the fact that a grown-up 90 kilogram pilot is not really ideally sized for an ultralight.

I had already abandoned all hope, when Torbjörn Bengtström, an instructor at the club, called me up one summer day, telling about a student having cancelled a lesson at the last minute. "Can you get yourself over here at the Malmi airport sometime soon?" I was standing at the bus stop for the local gen-av airport in less time than it takes to read these lines. I got to sit on the student seat for those thirty-plus minutes we circled above Helsinki area, trying to memorize that feeling, the sun, the seagulls over the waves. I thanked Benkku for his kindness and returned home, not booking any more lessons, not continuing with a hobby that I so painfully clearly couldn't afford.

On this May 1st, we drove out to see my lovely wife's childhood summer vacation surroundings around the town of Lohja. After lunch, we drove to have a look at nearby Nummela airfield, because... well, because it was there. A multicolored PIK-15 Hinu was towing white sailplanes up to the sky, and I was craning my neck upwards watching those wonderful flying machines. The Hinu stopped by the hangar after the last of the gliders was up, and the towpilot Jari Siltala came to introduce himself. "A fine day, a real flying weather! You familiar with sailplanes?" Well, no, but do tell us more...

At home, having thought about the matter overnight and casting claculatedly suppliant looks at my lovely wife, I went and signed up for a one-day introductory course of sailplane gliding. I said "It's only 160 Euros, and some people we know would blow that much on a single night out!" Of course, we knew the logic behind such introductory offers: like drug dealers, the people at the flyingf club were confident that after a day at the airfield I'd dig deep in my pockets for a full SPL course. But I had flown already years ago, so some degree of immunity already existed. Anyway, after getting a taste for flying, no other pastime will offer quite such enjoyment. 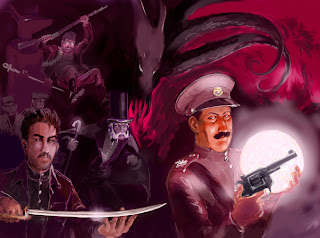 Another cover illustration got done, changing pretty much completely during the last days of the process. It got better, by the way. The short story collection is all about C. G. E. Mannerheim, and the times before he led the Finnish military forces during the years of the World War II. You can not find these stories in the accepted canon: according to the biographers, the young officer in the Czarist Russian army never encountered otherworldly or supernatural beings. What do they know?